It is with great pleasure to say that it has been an excellent 2017 – 18 season for most of the Norbreck snooker teams. Three of our teams having won honours, another just missing out and only one that had a poor season.

Our Tuesday first division side captained by Lee Johnson saw them finish in a very respectful 4th place. Every player contributed well during the season and this included the highest break of 67 in the division by Mark Firth.

Ross Benson was the player of the season for his team and also in the division by winning 76% of his games and he will deservedly pick up the divisions individual prize at the leagues presentation night.

The team captained by Tony Rinder finished 2nd and won promotion to division 1.

A strong performance in the 4 games before the final game kept their hopes alive of winning promotion. A superb 5-2 win in the last game at the Park club confirmed that the team would be promoted and only fell short by 2 points of winning the top spot.

Consistency by every player contributed to this successful season, however, it is good to see that Richard Purnell, Tony Rinder and Keiran Baines all finished in the top 10 of the division rankings.

The team captained by Glyn Williams saw them crowned champions.

Everybody played his part in making this a memorable season. Four of our players were ranked in the top 15 of the division, they are Richard Purnell, Keith Walton, Tony Rinder and Stuart Gregson but the remainder of the team was not far behind.

Keith Walton, a new player, has to be the signing of the season achieving 16 wins out of 25 and seeing his handicap coming down from plus 10 to minus 11. Richard Purnell has to be our player of the season, winning 19 of his 28 games and also achieving the number one spot in the division 1 rankings. Over 12 months ago in the previous season Richard had health issues and you could see that this affected his snooker. However, this season it is evident that he is now well and through his determination and practising he is now back to his best on the snooker table and he will receive a well-deserved individual prize at the leagues presentation night.

Not to be overshadowed by their colleagues in division 1 this team captained by Bernard Altham also finished as champions of division 2 and will start next season in the top flight.

The team was in pole position for the majority of the season but a slight dip in form at the business end of the season saw them needing a good win in their last game. They did not shirk their responsibilities and won in convincing style by winning 7-0 at Cleveleys Mens.

It was good to see that 2 new players, namely, Daryll Hall and Derek Ingle joined the squad this season and both played their part in addition to the long established players. It was also pleasing to see that Arnie Bentley finished second in the division 2 rankings and Steve Firth in 8th position.

Finally, we finish with disappointing news about our team in the second division of the Thursday night league. You could say that we had the strongest side in the league because all of the other teams were above us and we finished bottom.

Nevertheless there were still good individual performances throughout the season by Bernard Altham and Keiran Baines. One other good thing about this team is when the captain, Alan Butler, takes his turn in providing sandwiches he is also renowned for bringing in a luscious pork pie. 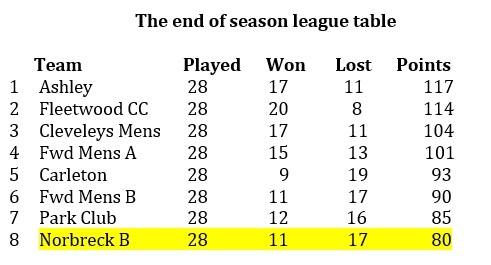 As previously mentioned it is great to see that Norbreck has had a successful season and yes we all like to win, however, the main reason in being part of a team is the comrade, enjoying meeting and competing against other players and don’t forget the sportsmanship.

The snooker section at the Norbreck club is not a closed shop; so, if any other club members are interested in playing for one of our teams then enter your name on the form that will be exhibited on the snooker board later in the summer.

Not a member of the club yet? Find out more about our memberships and how to join us.